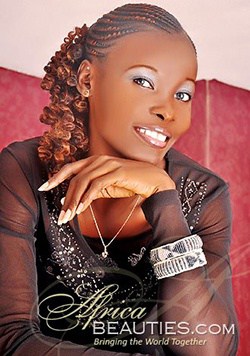 There are some women that, when they start to describe themselves and what they want out of life, that they just can’t stop giving you information.

While this may make our job easier at times, occasionally a lack of information can also tell you a great deal about somebody.

Which leads us to Assoua.

Her profile at African Beauties is one of those driver’s license profiles. Meaning of course that you could fit all the info into the space of a driver’s license; and in large print if you wanted to.

That fact may also give like I said a good bit of insight about what kind of person she is.

She describes herself quite simply as a shy lady.

Now, maybe this means that she doesn’t get out much or has been burned in the past by other men.

Don’t let the fact that she may not say much at first to you disappoint you.  If you were once a shy person or still am, this might be a good ice breaker between the two of you.

She is by her own admission the owner of a business. We don’t know exactly what the business is, but for anyone to say that they are going to take the chance of risking everything they own and have to make themselves a success takes a lot of guts and dedication.

This easily translates to relationships because you know that she will go the extra mile to make things work when things get tight.

Perhaps you can be the one to break the ice and get her to come out of her shell.