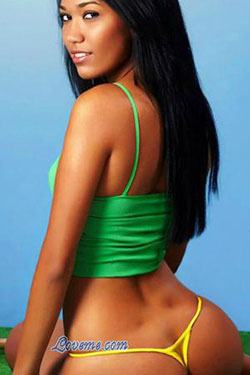 Kate is a stunning single mom from Costa Rica. Kate has a one year old son and describes herself as, “I am a responsible woman, a good mother, family-oriented, caring, sincere, reliable, humble, passionate, faithful and romantic.”

That seems very sensible to me and she is a stunner.

Now, she is not from a big city. She does not claim to speak any English, which is a little unusual for Costa Rica, but that may mean she is more or less a country girl.

Her hometown, Alajuela, only has a population of about 40,000. It is an agricultural town and it is not on the coast, so it appears to have missed out on most of the surfing, golfing, and partying Americans who have moved to the “Switzerland of Central America” in the last twenty or twenty-five years. That’s probably why she doesn’t speak English.

And that might not be a problem for you. I like the fact that she isn’t claiming English. She knows it would get her more attention, so I salute her for her honesty.

She really is a pretty lady. She says she works as a “sales lady” and that her highest level education is high school. I wonder what she sells.

I have no idea, but the old fashioned description makes me think she might work in a dress shop or something.

However, one thing strongly in her favor is that she mentions that, “I do not have an age preference.” That means there is a shot for you even if your favorite college football player is the great John David Crow.

Also, stating her lack of an age preference right up front means she is very serious about finding a man and to some extent that is probably related to being the mother of a small child.

Kate is over at LoveMe.com. Check her out!