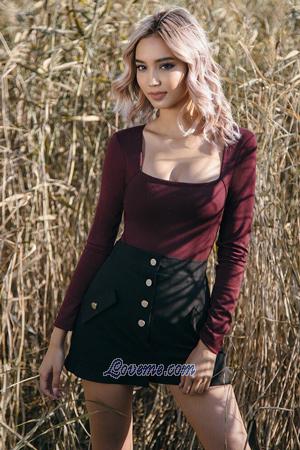 Arina is a perfect wife material. Sheis a stunning, beautiful and intellectual woman from Karagandy, Kazakhstan. She knows what she wants out of a man, and wants a man who equally knows what he wants from a woman.

She is balanced, currently, works as a director and is a Christian. She desires someone with similar beliefs, and a passion for life, love, happiness, and hard work.

Although she does not smoke or drink, nor is she into heavy partying or clubbing this does not mean that Arina doesn’t know how to enjoy herself and have a good time.

She does  enjoy a nice dinner, restaurants, going out on the town, dancing, and even seeing a nice theater show.

She is very articulate, classy, and even speaks 3 languages. Although her mother tongue Russian, Arina speaks fair English, and even better Arina. Jessica has never been married nor does she have kids.

However, does definitely want a man to settle down with, and one that knows how to take care of a woman.

This kind, professional, and beautiful woman seeks a man that is noble, loyal, honest, caring, and serious enough to be in a long-term relationship.

She hopes to have a family of her own one day and is looking for a man between the ages of preferably 33-50 years old.

Arina has long blonde hair, beautiful and mesmerizing brown eyes, and is an impressive 5″10. She takes very good care of herself and is of considerably petite size. She is also a Libra, so for anyone big on Horoscopes you might just be the perfect match.

Arina loves to travel and aspires to go to new places in the world, see how others live, and embrace her own culture while learning more about others.

She also enjoys photography a lot, so adventuring and seeing new places is something she wishes to always bring to life through her camera.

She is also an avid reader, and enjoys poetry – so if you’re interested in getting to know her if you don’t already, freshening up on some famous poetry could help you build a deeper connection if it’s something you’re genuinely interested in.

She also enjoys singing so someone that knows how to express themselves, enjoys music, and is looking to discover other types of music – such as that of her native Kazakhstan or even European music could be a great fit.

Arina is 25 years old and has lots of energy, enjoys life, and wishes to be with a man who also enjoys his and is looking to combine such happiness and a future together.