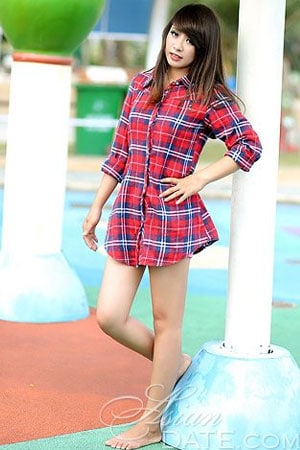 And she is fluent in English!

That is really important. Overcoming the language gap is a constant struggle. In my experience the Eastern European girls sometimes speak a little better English than they claim.

Latin girls are all over the place, but Asian girls claim some English knowledge, and they might actually know more about English grammar than you do, but often they really don’t speak any recognizable English at all.

So, to find a beautiful Vietnamese girl who speaks English and works as a tourist guide is really great because Thi probably really does speak understandable English.

So, you can discuss fishing with her. Yes, this beautiful Vietnamese lady likes to fish.

Praise the Lord for small miracles.

Wouldn’t you like to pull up to the marina with her in your boat?

Damn! That would be nice.

To go fishing with someone you didn’t feel like tossing into the water after two hours.

Let’s face it, you’ve probably been fishing for years with the same guys. They always talk about the same thing. Do you really need to hear another diatribe about Obama’s birth certificate?   Or the way that Alabama is going to roll to another National Championship this year?

If you were ever interested in what your fishing buddy was saying you probably aren’t now. When I was a kid I used to fish with an uncle who fought in the Korean War.

Now, when I was nine or ten I could listen to him go on about the Chinese bugles blowing as my uncle and the other Marines fought their way down from the Chosin Reservoir.

Uncle Frank told a hell of a story and I think most of them were true, but by the time I was twenty, well, I really didn’t have to listen anymore.

I’m sure I could sit in the boat all day and listen to Thi talk about anything she pleased. And, you would actually be able to understand her.

Yep, she would light up the whole lake light a beautiful sunrise.

She really is a beautiful girl. Her profile is over at AsianDate – which is one of our favorite dating agencies. We like it even better now that they have all these incredible Vietnamese brides on their site. Check her out!